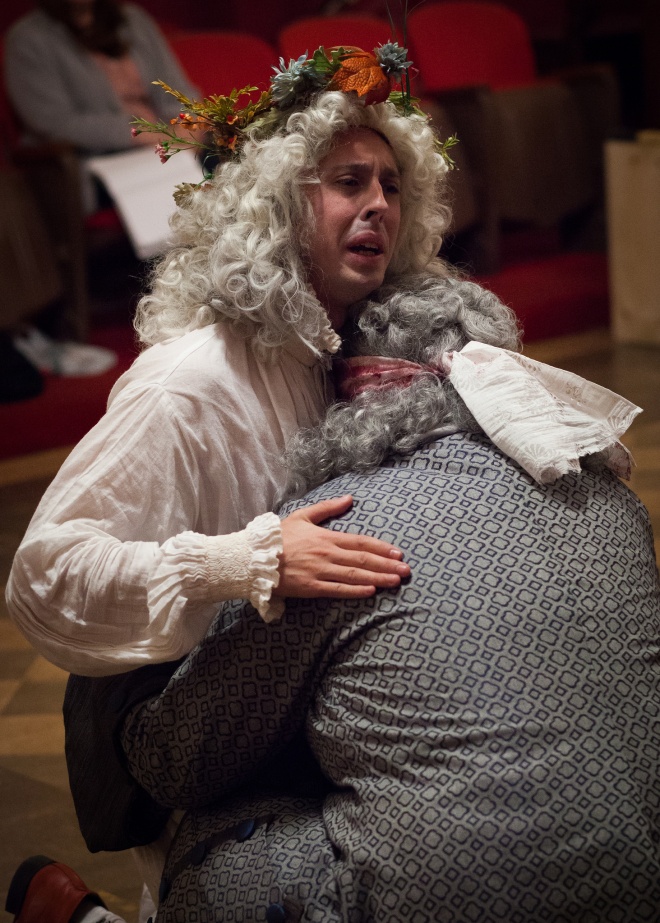 Posted on November 12, 2015 by austinentertainmentweekly Posted in Entertainment 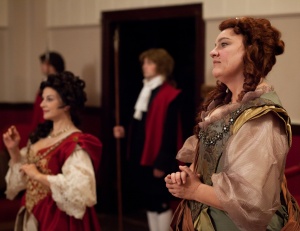 No playwright of the English language is more known or revered than William Shakespeare. The monolith upon which he stands is insurmountable for others to climb. In the centuries following his death his work has continually been relevant as both gorgeous poetry and riveting theatre. However, his work has always been ripe for revising, be it simply setting a play in another location and era, or rewriting his words for contemporary audiences as the Oregon Shakespeare Festival is haphazardly attempting. Though we have come to associate these tales with Shakespeare the vast majority of them came from preexisting source material. Is it not fair then for someone else to reinterpret the same stories in their own manner? Many have tried to varying degrees of success, but few have garnered as much attention as Nahum Tate’s reworking of King Lear. 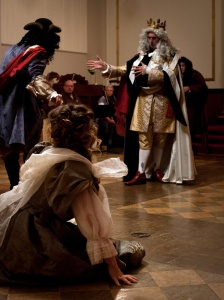 Nahum Tate’s The History of King Lear is the 1681 adaptation of Shakespeare’s The Tragedy of King Lear originally performed in 1606. What many modern theatre scholars believe to be a fantastic tragedy was poorly received at its birth. Tate’s adaptation was received greatly by audiences of Restoration-era England who saw the “happier” version of King Lear as an improvement upon the gloom and bloodshed Shakespeare’s tragedy offered. As a result this hybrid play, having retained a decent portion of Shakespeare’s structure and lines, became the preferred production of King Lear for over a century and a half. What follows is a story with which we are familiar yet feel is new. Modern scholars and critics have often scoffed at Tate’s creation in the shadow of Shakespeare’s King Lear, but are the jeers deserved? Thanks to The Hidden Room we now have the opportunity to judge Tate’s work for ourselves.

With this being a production by The Hidden Room, I dare not disclose this production’s location, but, suffice it to say, rarely have I seen a production with more fitting architecture than King Lear. Rather than a typical contemporary stage production, The Hidden Room utilizes a preexisting room already stylized to fit the setting and tone of the production. The audience is seated on opposite sides of the room, leaving the central space for the actors to perform. In lieu of lighting design the room is simply fully lit throughout. Any audio effects are covered by a trio of musicians (Howard Burkett, Cesar Osorio, and Jennifer Rose Davis) who play period-appropriate music before, during, and after the production, as well as create sound effects needed for the storm sequences. Most notably the costumes (designed by Jenny McNee and Rose Davis) are all akin to the Restoration, complete with elegant outfits, and large, flowing wigs. The only trouble I had with the overall design of the production came from confusing characters for one another beneath their wigs and garments, though this was only a concern in the early scenes and quickly resolved itself. It all comes together to create a piece of theatre that feels as though it could have been seen in the late 1600’s among the nobility and aristocrats of old.

To continue with differentiating this production with the modern era, The Hidden Room implemented era- 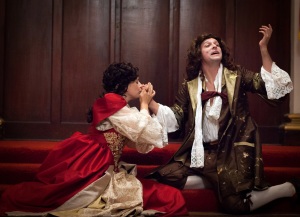 appropriate gestures with each line (Rose Davis). As director Beth Burns stated before the show, it may appear like the actors are chewing the scenery but this is how theatre was performed at the time. Every line and emotion were entangled with a gesture ranging from subtle to over-the-top. In time I found myself no longer noticing the gestures as something out of the ordinary with the exception of when something was intentionally performed in such a grandiose manner that one could not help but laugh. Naturally, this could have easily become campy and ridiculous, but thankfully they were implemented skillfully, adding a unique (by contemporary standards) flair to the production.

Tate’s adaptation mostly stays true to the characters of Shakespeare’s King Lear with a few notable alterations. The King of France has been removed entirely which, as a result, led to Cordelia gaining more prominence onstage, a romantic interest in Edgar, as well as an assistant in the new character of Arante. Further smaller changes came in renaming Gloucester as Gloster, Oswald as Gentleman Usher, and Edmund simply as Bastard. However, the most notable modification to the cast is the removal of Lear’s Fool. This is fitting for the role of the fool (especially in tragedies) is to be the cynical voice of reason as they openly call upon the follies of the protagonists. This happier edition of King Lear could have used a fool, but it was unnecessary (though I’ll openly admit I missed him for he is one of my favorite Shakespearean characters). 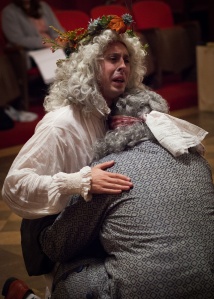 As a whole, the cast was on point, leaving me mostly satisfied throughout the production. Jill Swanson and Liz Beckham (Goneril and Reagan) were properly polite and subtly condescending, naturally making the shift from loving daughters to stone cold schemers and traitors without losing their grace and elegance. Similarly, Robert Deike (Gentleman Usher) was delightfully despicable in his persnickety yet sinister demeanor. On the less villainous side of the cast, Robert Matney (Gloster) continues the tradition of making Gloucester (arguably) the most pitiable character in the story. He beautifully shifts from maintaining his strength of will and devotion early in the play to distraught as he’s slowly stripped of his former solidarity. Ryan Crowder (Lear) was notably authoritarian, but I often found him to come off as too angry in his early, pre-madness scenes. Though he continually improved throughout the production as he relinquished his authority and sanity to the storm. The only cast member who troubled me was Joseph Garlock (Kent) who, while a perfectly capable actor, was disconnected as a character from the Restoration-era gesture acting that this production was implementing. As a result he often seemed dissimilar to the rest of the production.

But among all of the cast the two clear standouts are Judd Farris and Nathan Jerkins as brothers Edgar and Edmund (aka Bastard). Tasked with portraying the refined Edgar as well as the exiled Poor Tom o’ Bedlam, Farris expertly shifted between a noble romantic and an enthusiastic madman with finesse. As for Jerkins, I don’t believe I have ever seen an actor enjoy themselves onstage this much. The diabolical, manipulative bastard we know from Shakespeare’s King Lear is still here, but now he is theatrical, delightful, comedic, and dripping with giddy villainy. I could not help but smile whenever he had a monologue or soliloquy. If this is the scenery-chewing that Burns spoke of before the show then I’m glad to have it. Together the brothers made a perfect duo, one stoically heroic and the other joyfully evil.

To be frank I’m surprised I enjoyed The History of King Lear as much as I did. The notion of rewriting Shakespeare always raises an eyebrow, but, perhaps because it was a product of the same century as its predecessor, Tate’s King Lear is an entertaining piece of theatre and a welcome production for those who seek a fresh approach to Shakespeare’s King Lear. Any lover of Shakespeare’s work should seek The History of King Lear for the rare opportunity to see it onstage. It’s not for everyone, but, as Tate directly states to his audience:

If you like nothing you have seen today
The play your judgment damns, not you the play.

The Hidden Room’s The History of King Lear continues playing every Friday and Saturday at 8pm and Sundays at 5pm (with an extra performance at 8pm on Thursday November 12th) until November 29th.

2 thoughts on “Lear Strikes Gold In The Hidden Room! By Pearson Kashlak”